“It’s full up, no rooms. Nothing” the old Jewish woman sitting out on the porch said as I pushed at the stiff front door of the decaying Art deco hotel on Ocean Drive.  Stepping out of the Sun’s glaring heat into the air-conditioned artic air –  I could see the high white walls of the dirty marble lobby and a bare deserted reception desk; devoid of the usual hotel paraphernalia.  No computer, no leaflets or maps, indeed no receptionist.  Just a rotary phone with a padlock on the dial.

I stepped back out into the searing afternoon heat.  The woman looked up said “No Vacancies, probably won’t be till one of us passes on”.  She sat easily in her plastic chair, shaded by the canopy of the Art Deco awning; a delicate faded cotton dress rested lightly on her fragile skin.

“If you want a room, you’ll have to go down a-ways to where they are fixing up all the old places for the new folks coming in”

I had just met Lilian, my first Snowbird.

It is 1988 and I was lucky enough to be on Miami South Beach with photographer Barry Lewis at exactly the moment when the next page in the resorts’ unlikely history was being turned.

Lilian was one of the thousands of Jewish retirees – or “Snowbirds” – from NYC, Chicago & Philadelphia who had cashed in their chips and moved South to the cheap run-down beach hotels and rooming houses, looking for better health from the constant Miami sunshine.     After a prolonged drug fuelled violent crime wave, and restrictions on property development the Beach had lost its lustre and was shunned and so accommodation was easily affordable.

Sitting out on the hotel porches, quietly enjoying the ocean view, swapping memories queuing for the “Early Bird Special” at the local Jewish Diner these Snowbirds were eeking out their dwindling funds and diminishing years in what has been called “God’s waiting room”

Then in what seemed just a heartbeat, the curious mix of Retirees, Latinos, Blacks and

misfits who managed to co-exist on this narrow strip of land – which only three generations before was crocodile infested Mangrove swamps – had simply vanished.  Many Snowbirds died, others were pushed out by landlords and developers, who were waking up and smelling the coffee; and the aroma was good and was going to make them a lot of money.

Working with London photographer Barry Lewis we tried to document this moment; all in black & White as a counter point to the Art Déco pastels and the Neon nights.  In the 1970s, comedian Lenny Bruce said that Miami Beach was where neon goes to die.

This has resulted in a book of photographs shot durring those days when we walked all the streets of Miami Beach; meeting crazy and extraordinary and quite ordinary people, over 20 years ago.   It has been published by the very fabulous husband and wife owned Hoxton Mini Press in London, who have been releasing affordable photo art books for a few years; with dedication to the image and great affection to the subjects of the pictures. 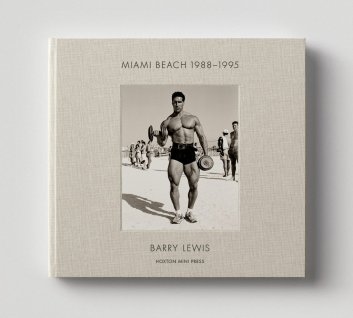 I have a very large sea shell collection; it's too big to keep at home, so I have left the collection scattered on various beaches around the world. Perhaps you've seen some it.
View all posts by Bill Hayes →
This entry was posted in History, Miami Beach, Minai South Beach, Uncategorized and tagged Barry Lewis photography, Florida, Hoxton Mini Press, Miami Dade, Ocean drive, shtetle, snowbirds, SoBe. Bookmark the permalink.

2 Responses to Miami Beach: where neon goes to die