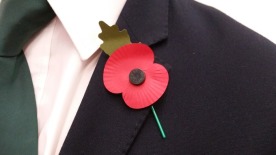 On November 11th I was travelling on the Great Western Railway to London.

Everywhere on Plymouth station there were notices advising that it being “Armistice Day”, there will be a national 2-minute silence to be observed for the fallen in past Wars.  Later, on the train, the guard announces there will be a 2 minute silence at 11.  It was 3 minutes to, and everyone went silent. Then phones began sounding, unanswered throughout the carriage.

Mine also. It didn’t matter.

I expect that had mobile phones been around 100 years ago there would have been so many  phones across Europe that would have gone unanswered.

The 2 minutes silence is a remembrance of that moment at the 11th hour of the 11th day of the 11th Month when the Allies and Germany signed an armistice and the first world war came to an end.

Every November, on the nearest Sunday to the 11th (when the 2-minute silence is always observed) “Remembrance Day” ceremonial services are held at War Memorials across the country.   Wreaths are laid, prayers said and a Lone bugler plays the last post,

preceded by the war poem with these words: ”They were staunch to the end against odds uncounted, They fell with their faces to the foe. They shall grow not old, as we that are left grow old: Age shall not weary them, nor the years condemn. At the going down of the sun and in the morning. We will remember them”

WW1 was the first “civilian” war, in that it was not just fought by the standing army.  In 1916, the country was running out of soldiers and so “conscription” was established forcing all males between 18 and 40 to present themselves for the war Effort.  There were exemptions, members of the clergy, those with disabilities and widowers with children.   Males within those ages, thought not to be making the ultimate sacrifice for King and Country, were given white feathers – a symbol of cowardice – by women.

The movement was to shame men into enlisting, it was even supported by suffragette 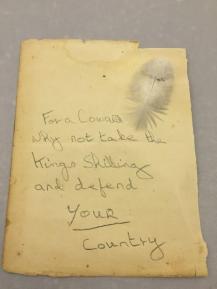 Emeline Pankhurst, but it soon got out of hand.  Some soldiers returning from the front would divest themselves of their uniform because they were rotten with lice.   One soldier on leave remarked to the woman who handed him a white feather that he would take it back to the boys in the trenches of Passchendaele.

When driving around this land, stop off in any village or town, and you’ll find a war memorial.  These started appearing after the First Great War as a reaction to the government’s failure to repatriate the dead.  With the total of British deaths; around 744,000, it was an impossible task.

Through public subscription and charitable fund raising these small or larger War memorials sprung up in every hamlet, and if funds allowed, the names and ranks of all the local dead were inscribed.  Without graves, they became the place where people could come together and grieve.    At the same this was happening, there was a growing movement in support of a national War memorial.   A kind of national headstone.   Edwin Lutyens, the last architect of Empire designed the Cenotaph (Empty grave), that sits in the middle of Whitehall in London.   On Rememberance Day the head of state, the government, chiefs of all the armed services and ex-service people and their families gather there and lay tributes to the dead of war, all wars.

The symbol that binds all this terrible history together is the Red Poppy.  It is so because when the warm Spring Sun bathed the churned-up mud of Northern France and Belgium the first thing to grow from the rude earth was the Red Poppy.

So, every November people buy red paper poppies and wear them in their lapels.

The proceeds go to the British Legion Charity to provide welfare for ex-servicemen and women.  They are woven into wreathes, they are on flags and some people have them tattooed on themselves.  They attach them to little wooden crosses to be laid at the base of the War memorials

In 2014, the centenary of the outbreak of the slaughterous First World War, over 880,000 red sculptured ceramic poppies were placed at the historical Tower of London, weeping

from a window down into the moat of the castle.  The installation was called “Blood Swept Lands and Seas of Red”   a quote from a poem found on the body of an unknown British soldier.

In recent years it has become compulsory for anyone in public life to be seen the wearing the flower; no one ever appears on British television in November without one.   Unfortunately, those who through design or carelessness, do not adorn the Red Poppy are frowned upon. 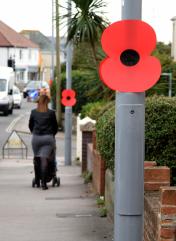 But in all the years of travel on this railway I have never seen such poppycock as I had on this day.

For the first time ever, in towns and cities across the country, plastic poppies the size of landmines were strapped to every lamppost.   Where did that come from?

Funny how things go. We liberate Europe. We join Europe.   Now we leave Europe.   We do so after the longest period of peace on this continent for over 400 years.

Our politicians are already branding some European leaders as the enemy.  Polish people, who’s grandparents fought valiantly along side this country and what it stood for, are now seen as invaders.

Nationalism is afoot in the land.  There are those who have bestowed upon the poppy the burden of displaying our patriotism. We don’t need libraries or new school books but we do need a poppy on every lamppost and by this time next year no doubt, on every person as well.

If you squint with one eye and if you tilt your head thus and look at these poppies on the lampposts, they almost look like white feathers.

I have a very large sea shell collection; it's too big to keep at home, so I have left the collection scattered on various beaches around the world. Perhaps you've seen some it.
View all posts by Bill Hayes →
This entry was posted in #FBPE, #STOPBREXIT, #WATON, Uncategorized, War & Peace and tagged amistice, brexit, british legion, cenotaph, Europe, poppies at the tower, poppy, red poppy, war memorial, white feather, WW1. Bookmark the permalink.