The King’s time to Mumbai

They call it Brunel’s Billiard table.

They do so, because across the entire 110 miles of the Great Western Railway line running between London and Bristol, there is a drop in gradient of only one foot – making it so easy to glide westwards effortlessly across this green and pleasant, as smooth as a baby’s; chasing the eternal sunset as it slips beyond the horizon to America..

The magnificent GWR was built by the pioneering engineer Isambard Kingdom Brunel.  He learned his trade from his father, a canal and tunnel engineer. His company was awarded the job of building the main East-West railway across southern 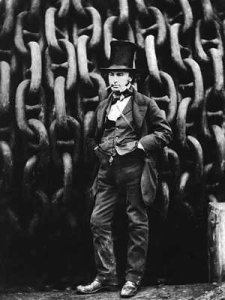 Isambard Kingdon Brunel stands before the launching chains of the SS Great Eastern which at the time, was the largest Iron vessel afloat that could travel the globe without refuelling. This ship was launched the same month that the Royal Albert Bridge was opened.

England connecting the capital with the great trading Port of Bristol in West.   In less than a month he had ridden on horseback across the virgin countryside and surveyed the entire route for the new railway.  He supervised a team of engineers and draughtsmen and between them they designed the locomotives and rolling stock, the bridges and tunnels, the embankments and cuttings; the GWR Hotels and of course the great stations.

Not only was Brunel an incredible engineer, but he was shrewd businessman.  He could let the railway rise and fall with the undulating landscape, but he preferred instead to spend the money in the construction of bridges and cuttings, tunnels and banking to keep the line level.  Better to spend the money on the construction now to keep the line level rather than spend it later on coal to power the locomotives as they climbed unnecessary hills.

After London and Bristol were joined, Brunel was commissioned to extend the GWR deeper into the West Country.  It travelled west into Wales, running past the steel and coal workshops from Newport to Cardiff and Swansea, finishing at Fishguard Harbour, from where one could catch the mail boat to Ireland.

The GWR also ran south from Bristol down to the long western leg of the country.    Across the bountiful county of Somerset and sleepy Dorset with its market towns and Jurassic coastline the line travelled across the summer county of Devon.  The first stop in Devon is the ancient wool city of Exeter; (which was the most westerly Roman settlement in the known world).  The last station in Devon is the great Naval port of Plymouth from whose harbour steps the dour Pilgrims set sail on the Mayflower for the Americas.

Once past Exeter, the terrain gave Brunel some real challenges.  Inland, he faced a steep climb through hills that rise 200 feet 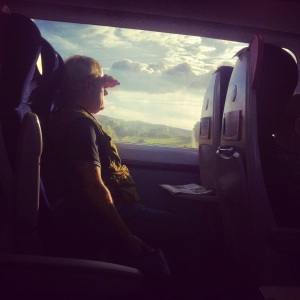 Sliding across this green and pleasant.
pic: Alice Hayes

high and then beyond them the vast and remote expanse of High Dartmoor. To the south, he had a steep coastline to negotiate.  He chose to run his tracks nestled tightly at the foot of the red sand cliffs.  In bad weather the sea pounds the passing trains with crashing waves.  This route skirts along the edge of Dartmoor and gently down into Plymouth.

The last leg would take the GWR across the Tamar River which separates Devon and Cornwall as it flows out past the naval dockyard into Plymouth Sound.  There was however, a big problem building a bridge across the water.  The nearest point between the two banks where it would be sensible to build a bridge was where they rose to 100 feet high on both sides.   Brunel couldn’t bring his railway to a lower part of the river bank because the Royal Navy insisted that any bridge across the River have a 100 foot clearance allowing their vessels to pass under.

Undaunted, Brunel stood at the spot on the high bank, and looked across the 1000 feet of estuary that separated Devon and Cornwall at its narrowest point and imagined  his bridge rising 100 feet above the Tamar River.  It would have to sit in 85 feet of fast moving water.

There were two principal difficulties. First, the creation of the pier in the middle of the river, which Brunel solved by designing a Great Cylinder to be floated into position and to act as a coffer dam .  Sealed at the top, the cylinder was pressurised and the water was pumped out so that the navvies could work inside setting the footings for the supports.

The second difficulty was the raising of the main spans a hundred feet up above the water.  These were built on the Devon 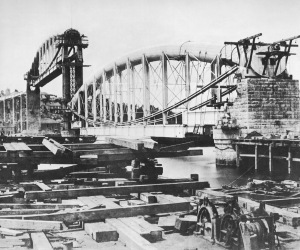 Each day, the span was lifted a few inches.

foreshore and floated into position. The Cornwall pier was erected first and jacked up three feet at a time to enable the brickwork on the landward piers and ironwork on the central pier to be erected beneath.   It took three weeks to float each of the two lenticular sections into place and several more weeks to slowly inch the section upwards to the desired height.

What makes this bridge even more remarkable is that the two approach sections are curved.  Normally a bridge construction can rely on the strength of straddling in a straight line from bank to bank.

In 1859 the bridge was opened by Queen Victoria’s consort, Prince Albert after whom it was named.   Brunel, who was too ill to attend the opening died a couple of weeks later.  One hundred and fifty years on, his legacy and Bridge are still standing.

Brunel was recently voted 2nd most important Brittan of all time, he was celebrated in the opening ceremony of the London Olympics, where he was portrayed by Kenneth Branagh extolling the achievements of the Industrial revolution.

As the trains were eating up the miles across this sceptred Isle something surprising happened and which had never occurred to anyone before as being important.   Despite Britain being a relatively small island, there was a time difference between London and Bristol of about 20 minutes.  Ordinarily, this wouldn’t have mattered very much, but with arrival of the railways something new was born – the dreaded timetable. 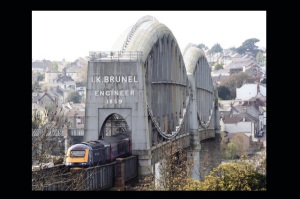 Speed limit on the bridge is now 15mph.

Horse powered travel was a hit and miss affair, but the railways energised punctuality and made each journey an example never to be deviated from.  A “coach and four” racing across the countryside on unkempt roads, through all weathers, would arrive when, well – when they arrived.  Not so the train.  If the train took two hours today, well by Jove, it should take exactly two hours again tomorrow – or there would be a loss in profits.   For this to work, time would have to be standardised across the land.  All trains run on London time.

Each night for over 70 years a leather pouch was carried on the boat train that would leave Euston station in London bound for the night Ferry to Dublin.  This pouch contained a large pocket watch- like time piece that would be judiciously wound up and set by the Station Master just prior to the Boat Train’s departure.  The next Morning this time piece was used to synchronise the big clock in the Dublin General Post office.  This was known as “taking the King’s Time to Dublin” – that most westerly outpost of the British Empire was slavishly shackled to London time.  This nightly tradition continued well past the Irish revolution but stopped in 1939 with outbreak of WW2.

There is nothing we can do about it now; we are all absorbed into the great time table that our society is governed by.     One 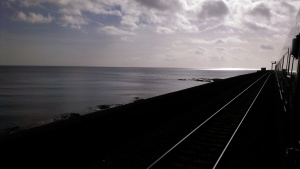 The line runs alongside the sea at Dawlish. That sleeping sea when awakeden thrashes the passing trains.

afternoon I stood on the platform of the station at Saltash, the hamlet on the Cornwall side of the Royal Albert Bridge. The station is like so many others across the network, unmanned, automated, deserted, yet trains still stop there.   Sadly, the  old derelict station house is falling into disrepair.  Looking along the platform at  the tracks curving out of the station and immediately onto the bridge,  I thought it would be quite nice to pick up the next train travelling east to Plymouth and treat myself to a ride across Brunel’s masterpiece.

I had no idea when the next train was due.   At the entranced to the platform was a lamp post and on it- a white box with a big button marked “information” I pressed it, and a disembodied woman’s voice answered “Good afternoon, Can I help you?”  When is the next train going east from Saltash I enquired?  She repeated my question for clarity and in so doing, revealed an accent I couldn’t quite place.  Across this little nation there are regional accents that are as 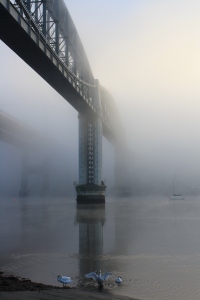 The view of the Bridge from the Saltash foreshore.
click to view larger.

different and as unique as the landscape.  “Are you in Swindon?”  I asked, thinking that I was getting my information from main office of the GWR.  No she was not.  Maybe somewhere further down the line perhaps, in a distant part of Cornwall I hadn’t been to yet?   Some folks speak right funny down there.

No.  I was standing there on a warm afternoon talking into a tin box on a Lamp post with a representative of the Railway Company five thousand miles away in Mumbai, India – another long lost outpost of the Empire.   She had said “Good afternoon” but it must have been nearly midnight there.  She consulted the time table and there wouldn’t be a train stopping there for some time.

We used to take the King’s time to Dublin and now the King’s time table is delivered to us by a sleepy late night call centre worker in India through hundreds of miles of optic fibres and via satellites high above the earth. 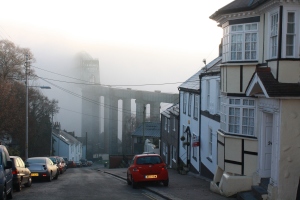 The Bridge leaves Saltash and stetches through the mist across to Devon.
click to enlarge

My trip across Brunel’s bridge would have to be for another day.  There’s no hurry – that magnificent bridge has stood and been used daily for the past 150 years.  As engineering projects around the world go, it’s no super star.  Any true engineer looking at the Royal Albert Bridge will agree; that given the resources and materials available to Brunel, it is one of the great wonders of the industrial revolution.

….and it’s just down the road from where I live.

I have a very large sea shell collection; it's too big to keep at home, so I have left the collection scattered on various beaches around the world. Perhaps you've seen some it.
View all posts by Bill Hayes →
This entry was posted in engineering, History, railways, transport, Uncategorized and tagged bridges, Brunel, engineering, great western railway, gwr, Industrial revolution, Roya;l Albert Bridge, Saltash. Bookmark the permalink.

15 Responses to The King’s time to Mumbai